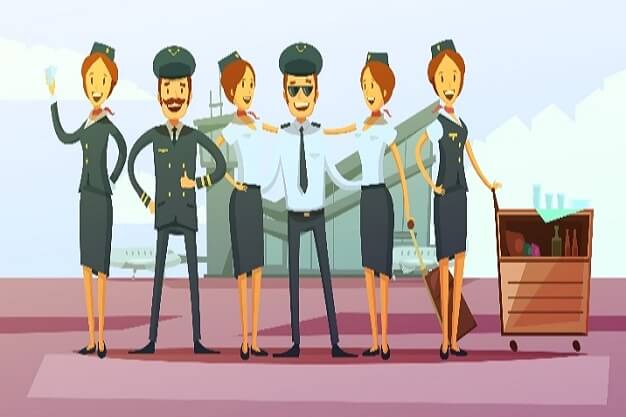 A Day In The Life Of An Airline Pilot

A Day In The Life Of An Airline Pilot

Have you ever wondered about, how the day to day life of an Airline pilot looks like? While this has always been something to which every aspiring pilot looks up to after they join the airline, people outside this industry are often bamboozled by this “too good to be true” daily life of pilots. So if you are keen to know the intricacies of the daily life of an airline pilot, join us as we hop in the shoes of an Airline Pilot and explore a day in his life.

Arriving At The Airport-

A typical day for a commercial airline pilot starts by checking his roster. A roster is a typical crew schedule describing the number of flights for that day and the time for your first flight. Airline pilots are generally required to report at least 60 mins ahead of departure time for domestic flights and 75 mins for international. Arriving at the airport you are required to report at the Operations Control Centre(OCC). The OCC is the department that is responsible for crew logistics, reporting, dispatch and inflight monitoring. After logging in their time of arrival at the dispatch centre, pilots are required to do their BA(breath analyser test) confirming they are not intoxicated, well-rested and fit enough for the flight.

This is followed by the dispatch centre handing over all the necessary documents required for the flight, to the First-officer. The bunch includes FRC(Flight Release Certificate), NOTAMS, NOTACS, Weather reports, any special company notices and the flight plan.

One of the most essential tasks before each flight is conducting a crew briefing. Once the First Officer gets handed over the required paperwork, he along with the captain heads over to the briefing room to meet and brief the cabin crew. The weather charts are thoroughly reviewed by the pilots and any potential turbulence, weather hazards are discussed. Pilots need to be well versed about the weather conditions both at the departure and destination aerodromes. The flight plan is looked upon by the captain to cross- check the fuel load, cargo and passenger distribution. The flight plan plays an important role in determining that the flight is conducted smoothly without any hiccups.

Finally, both the pilots go through the maintenance release to assure the latest maintenance was done properly and the aircraft is airworthy.

It’s time to head over to the aircraft now. The pilots upon entering the cockpit begin with their preliminary cockpit preparations and safety checks. Upon completion, the captain or the first officer heads down for the aircraft walk around, carefully examining the exterior with their well-trained eyes. Finally, after everything is checked, the captain signs the maintenance release and the flight dispatch form authorising that the aircraft is airworthy and he is the sole commander responsible for that mighty bird.

Once all the passengers have boarded, doors are closed, you are ready for the pushback and taxi. The pilots are also required to make a little PA before the taxi, just to make the passengers feel more welcomed. This is your time to rise and shine and showcase your oratory skills. As the passengers' board and get comfortable in their seats, the pilot is working on programming the flight management system (FMS). This computer system automates several in-flight tasks, which helps reduce the workload on the flight crew. When the system receives the flight plan and the aircraft’s position, the FMS calculates your flight path. The pilot can follow this course manually or set the autopilot to follow the course.

Finally, when the air-hostess is done with their pre-flight duties, it’s time to line up with the runway and take off. The adrenaline rushing through the nerves of the pilot as he pushes the thrust levers to the maximum to achieve 150Mph is a surreal feeling.

Slowly the wheel parts away from the ground and the bird is in the air. As the aircraft steadily maintains the climb through 5,000 feet the landscape becomes smaller and one of the critical flight phases is complete.

Once the plane takes flight, the busy work is done, and the real job begins. As the pilot activates the auto-pilot and an attendant brings him his coffee, he gazes out at the curvature of the earth and reflects on why he loves his job. Though the concentration factor during the cruise is low, it’s not nil. The pilots constantly monitor the radio frequencies for any emergency callouts, keep a watch on the flight instruments ensuring they operate within the parameters and always ready to take over in case of any anomalies.

As you’re cleared for your initial descent, you steer the plane downwards toward the landing strip at your destination. You adjust the airspeed and landing gear as you approach the runway. After the wheels have touched down, the reverse thrusters are engaged to help slow the giant aircraft.

When you reach taxiing speed, welcome your passengers to the city and tell them to remain seated until the plane has come to a complete stop and the seatbelt sign has been turned off. As you pull up to the gate, another safe, successful flight has been completed.

You thank your passengers for choosing your airline as they file off the plane.

One common trait found in all Airline pilots is that they are a wanderer’s soul. Pilots need to get certain hours of rest before they can again hop on for their next flight. As a result, nothing can be more exciting than spending an entire night in a completely new city at a 5-star hotel booked by your company.

After the flight, the pilots finally head to the hotel, take some rest and they can explore the allies of the city, maybe grab a bite later at night. Many a time this can be a destination which you dreamt of visiting your entire life, who knows?

If the above article sounds interesting and tingles your heart to be a part of this profession, you are not the only one. If you are ready to take off in your new career and eager to know How to become a pilot, how to get your commercial pilot license, contact us at info@thepilot.in.

Till then, Happy landings.