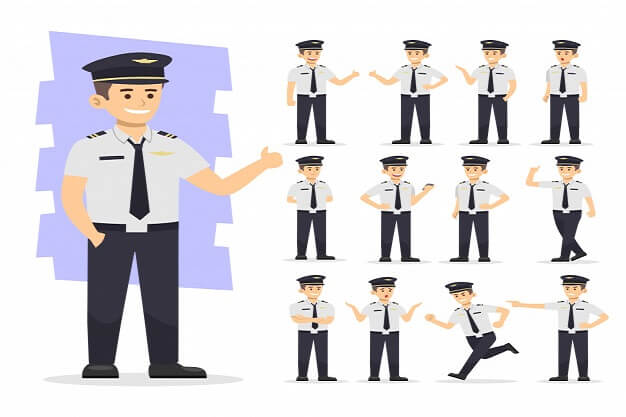 Have you ever searched the Top 10 Highest Paying Jobs In India? For all those of you who have searched it, you must be aware among all the other professions, one which always comes amidst the top 5 is being a Commercial Airline Pilot in India. For aspiring pilots, this has always been something that fuels their dream of becoming an Airline Pilot and for others, this is something that leaves them in awe, that why few are paid so generously for just sitting and operating the autopilot.

While in the top 5 results, the medical professionals, data analysts also show up along with being a Commercial Airline Pilot, what makes being an Airline Pilot so lucrative is the lesser competition in this field. In a country like India where there is cut-throat competition for being doctors and engineers, the supply for well trained commercial pilots is really low according to the demand.

So if you are an aspiring pilot eager to know the intricacies of the salary structure of an Airline Pilot in India or a layman wishing to know why Commercial Airline Pilots are paid so much, this post is for you.

The common question, which circles in forums and creates a lot of

confusion among aspiring pilots is that “Are all Pilots paid the same?” The simple answer to that is a NO. The Pilot salaries depend upon various factors. Are you an Airline Pilot or a Chartered Pilot? Even if you belong to the same Airline there will be a difference in the pilot salaries based on their ranks. Airlines also have a system of seniority accounted for in their salary structure. You will be surprised to know pilots holding the same ranks within the same Airline, might be having a different salary structure, owing to the fact one is senior to the other in terms of experience and flying hours, on a particular aircraft.

Next comes the type of aircraft which the respective pilot flies. An Airline having a fleet of Airbus, Boeing and Atr comprising both narrow and wide-body aircraft from the above-mentioned companies will have different pilot salaries for pilots flying the different type of aircraft. In this post, we will take into account the general average Pilot salaries for Airlines in India.

A Junior First Officer or a Second officer is someone with a valid Commercial Pilot License, RTR, FRTOL, a valid class 1 medical and 200 flying hours under his belt. A Junior first officer is a pilot who has just joined the Airline and he or she is under training/supervision of Senior Pilots. This period of training is also referred to as Line Training, which generally lasts for about 6-8 months, depending on Airlines. During this time a Junior First officer is paid an average monthly salary of 1,20,000 to 1,60,000 INR.

Taking into account all the above-mentioned facts, the average monthly pilot salary for First Officer ranges between 2,60,000 – 3,30,000 INR.

A pilot with over 1000 hours on a particular aircraft and a frozen ATPL is considered a Senior First Officer. The pay structure is similar to that of a First Officer(70 hours monthly flying, anything above 70 counts as overtime allowance) but an SFO is generally paid more owing to his experience and seniority in the Airline.

Change in position. Now the pilot flies from the left-hand seat and is the commander of the aircraft. A pilot becomes a captain in the airline only after logging 3000 hours on the type, clearing the ATPL exam and finally the internal company training. On average the salary for Airline Captains in India can range anywhere between 6,70,000 – 7,20,000 INR per month.

Once you become a Captain in an Airline, though there are no further promotions, one can take hold of various senior posts within the company. There are various management positions like Fleet Captain, Base Captain, Fleet supervisor for which you can get an additional 70,000 – 1,00,00 INR monthly along with your monthly captain’s salary.

On the training department, one can opt to become a Line Training Captain, Type Rated Examiner and finally a Designated Examiner, which adds a further 1,30,000 INR to your captain’s monthly salary, taking the total amount to a whopping 8,50,000 INR.

Though the figures may seem sweet, nothing worthy comes easy.

Becoming a Pilot isn’t easy. But what’s more difficult is keeping your license safe after you become a pilot. Pilots are not in the cockpit just to monitor the autopilot, they are responsible for the safety of the passengers, landing the aircraft manually and constantly monitoring the system, being ready to take over in case of any anomalies.

Also to keep in mind, the salaries are subjected to taxation before they are credited. All the above pieces of information are provided correctly to the best of our knowledge. Salaries are expected to change without any prior notice, at the sole discretion of the airlines. Please check the Airline’s website for the latest information on careers and pilot salary structures.

For any further queries on How to become a pilot in India, Pilot schools in the USA or NZ feel free to go through our website https://www.thepilot.in/ or contact us at info@thepilot.in.