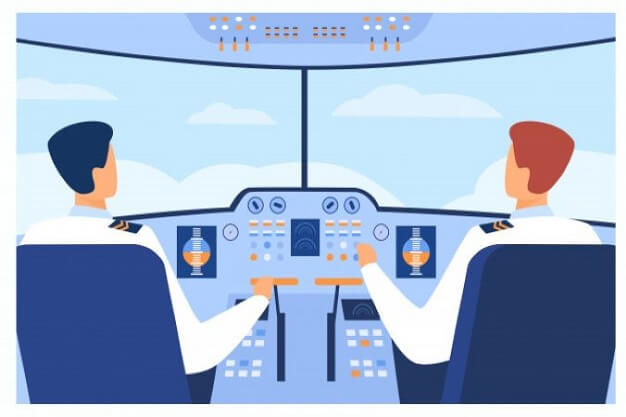 “For once you have tasted flight, you will forever walk the Earth with your eyes turned skyward. For there you have been. And there you will always long to return”.

For few people, it’s just another quote by Leo Nardo Da Vinci. But for some, it’s a quote that fuels their passion, the passion for flying. It’s something in line with their dream of becoming a Commercial Pilot, getting their first solo flight. But, with the pandemic hitting us hard in 2020 many dreams got halted even before they could take off and lately the majority of questions that we are getting consists of just a basic doubt- “Is being a commercial pilot still worth it?’’. Through this post, we will not only discuss what’s the current scenario and the future looks like but also why being a Commercial Airline Pilot is still one of the most lucrative career options out there.

Since the pandemic started though there has been a decline in passenger load capacity for Airlines, it saw an unprecedented rise in cargo transportation both internationally and domestically. The demand for cargo transportation like vaccines, medical aid did not only help to keep the Airlines running but also made them convert more of their passenger planes into cargo carriers. As a result, the pilots of respective airlines were the frontline workers in carrying the cargo from one place to the other. Whenever the pandemic ends Air transportation will always be the safest and fastest means of travel for which Pilots will always be needed.

Being an Airline Pilot is no ordinary job. It requires flying skill, decision-making skills, taking responsibility for your crew and passengers. Though the job demands a lot, it gives a lot in return. Imagine getting ready for a job that lets you fly a beautiful piece of machinery up above at 36,000 feet while watching the beautiful sunset and cruising among the clouds. The thrill and excitement while you push the thrust levers for taking off, give you an adrenaline rush like none other. The exhilarating experience of expecting a new challenge every day and being ready for it makes this job one of a kind.

Wanderer soul? This job gets you covered-

Remember the childhood days when we used to get excited about visiting a new place or our grandma’s house? What if you can get this same feeling every day. If you love travelling and also someone passionate about flying, commercial pilot training is for you. Being an Airline Pilot lets you fly to different parts of the country while doing your job. If you are someone who is into travelling you can utilize your layover exploring a lot of places while even ticking off your bucket list’s travel destinations sometimes.

There’s a saying No two flights are the same. Neither are the crew. It’s extremely rare for Airline Pilots to fly with the same crew twice. On most of the flights, you will be meeting a new bunch of faces. So if you are someone who loves to socialize, make friends and work with new people every day, you are in for a treat by choosing to be an Airline Pilot.

What if someone tells you while you get to travel for free being an Airline Pilot, you can also take your parents and siblings on short getaways for free. Being an Airline Pilot gives you access to free Airline tickets for your family members within all your destinations. That’s one of the most enjoyed perks among Airline Pilots all over the world officially known as “Staff Travel Allowance”.

Last but not Least, Respect-

Ever seen a child at the airport when he sees the Pilot walking by, or just gets a glimpse of the cockpit and his eyes lit up. Not only a child but an Airline Pilot is seen with respect in everyone’s eyes in society. The social reputation is worth getting into commercial pilot training to be an Airline Pilot in the future.

Though everything seems fine, all the things that are too good to listen to might not be a piece of cakewalk to achieve. Undergoing commercial pilot training and finally making it as an Airline Pilot requires a lot of patience, hard work and determination. Putting in a bit of effort in the initial days offers you a rewarding career at the end of your commercial pilot training.

Hope this clarifies all your doubts. If you have any queries regarding How To Be A Pilot In India, How to start your Commercial pilot training according to the airline standards, Which flight school might be the best for you, feel free to contact us at info@thepilot.in.